Welcome to our most ambitious post to date. We’re really getting into grains in a big way at the moment, along our climate kind, meat-reducin’ wasting nothin’ path. So we’re gunna take a few to witter on about these five grains with a recipe for each, showcasing the extraordinary versitility of ancient grains.

Before we launch in, it’s actually four grains and a seed but we’re so enamoured with the little wonders that we had to include chia seeds.

So, a recipe a day for 5 days. See what we mean by ambitious, we’ve not acheived a consistent frequency with indiviual posts yet, we’ll see how this goes.

Okay, so buckwheat isn’t actually a grain. Off to a good start then. One of the great pseudograins, the plant is a relative of sorrel and rhubarb would you adam and eve. It comes in many forms, most commonly as groats either raw (buckwheat) or toasted (kasha), or as flour. You can also sprout the little nuggets too, which is pretty tidy.

It may not be a true grain but it is ruddy ancient. It was first cultivated in Southeast Asia, some say as early as 6,000BCE, had become commonplace in the Balkans by 4,000BCE, and was one of the main crops the Europeans took with them to North America. Buckwheat likes a challenge too, growing in poor soil quality and in difficult climates at altitude. It’s easy to see why buckwheat (soba) noodles have such a stronghold in Japanese and Tibetan culture.

It’s awesomeness doesn’t end there, boy is it good for you. It contains all the essential amino acids which makes it a complete protein. It’s low fat and rich in loads of vitamins and minerals like B6, niacin, riboflavin, thiamin, zinc, magnesium, iron, yada yada. Actually especially iron, a whopping 26% of the recommended daily amount.

So why did we tire of cultivating buckwheat in the 20th century given all this good stuff? Oh yeah, the introduction of nitrogen fertilizers, silly.

Makes a reet-awesome porridge as we discovered this weekend. Behold, our first ever buckwheat encounter (recipe on it’s way later today) – 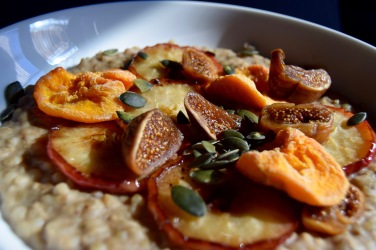 Greenwheat Freekeh is true grain, phew-y. It’s a hard wheat (durum most frequently) which is harvested while the plant is still young and green, and then rubbed and roasted. This is what gives freekeh its unique smoky flavour.

Rumour has it that freekeh was discovered when a village in the ancient Eastern Med picked young wheat hurriedly to save it before an imminent attack on their city.  Fires from the attack burnt the wheat and the locals found that this roasted young wheat was fine to eat, and delicious. They were not wrong.

Durum traces it’s roots back to Eygpt and surrounding areas and Eastern Europe. And durum is a Latin word, giving the rumour added ummph, it would seem. Italians know what durum’s about still, pasta, pizza dough and semolina are all made from durum wheat. Freekeh’s first known apperance came in an early 13th century cook book in Baghdad and is an ancient Arabic grain. It is commonly used, and always has been, throughout Middle Eastern and North African cuisine.

It’s got more protein in it than quinoa and twice as much fibre, all the B’s and is a rich source of minerals, especially manganese. *

Get Your Freak On… with this phenomenal salad (Wednesday’s wheat) –

Another seed, this one pretending to be a grain. It’s grain like, sure, and its name means “mother grain” in Inca but that is as far as it goes, pretty little grain imposter. Quinoa was domesticated in the Andes Mountains as far back as 5,000 years ago, and before that it was associated with herding 7,000 years ago.

Like buckwheat, it’s a complete protein, containing all 9 amino acids as it does. It’s also a great source of high-quality protein, whatever that means, with 8g per 100g serving, fibre, riboflavin, thiamin, and niacin. It furnishes you with 20% of the iron and phosphorus you require daily, and 9% of your potassium requirements.

The Inca’s knew a thing or two hey, that list of nutrients we’ve just rattled off are shown to boost immunity, improve muscle quality, regulate hormone production and help the body metabolize energy. All good survival tools in the ancient Andes we’d wager.

Today the whole world knows how mighty quinoa is, it’s so mighty you can make burgers out of it. Here are the results of our first attempt at quinoa burgers  (Thursday’s dish) –

Oats ain’t as ancient as they would have us believe. When we started cultivating wheat and barley back in the day in the Fertile Crescent, the oats that inveriably grew among them both were considered weeds. It wasn’t until wheat and barley (and the weeds along with them) reached Northwestern Europe and the Himalayas that oats caught on as a thing. Oats like cooler, wetter climates and that’s probably why it took hold in these new lands. This was way back when in 1,000BCE.

Not much more we can add about the oat. No wait a minute, it’s only got 26g of protein per yer average 156g serving, how’s that for a fact. It’s high in all the things the other ancient grains are good at, and it’s got one major advantage over the others, it’s the whole grain, everytime.

This recipe is a long standing favourite round these ends, feast your eyes on leek and stilton crumble (Friday’s child) –

The Aztecs were all over these nutritional wonder seeds, believing them to have supernatural powers. Historians suggest, some of them anyway, that chia was as important a crop as maize back in 3,500BCE. Still in abundant use in Mexico, Guatemala, Bolivia and across Central and South America, these little seeds punch well above their weight in the nutrition, versitility and taste stakes. Low in colestorol and sodium, high in calcium, phosphorus and manganese, not bad for a member of the mint family.

What’s more these clever chia’s plump right up when they’re soaked and come together as dessert – they do all the work! Chia pudding, our new breakfast, dessert and anytime companion (Saturday seeds) –

Hope you found this accessible, informative and enjoyable to read, we did bang on a bit. Your thoughts are always welcomed and we’d love to hear about the grain recipes you’ve been cooking up a storm with. Go on, leave us a comment.

2 thoughts on “These 5 Grains”