Another incidentally veegs delight from Smith & Daughters in Melbourne.

While easy, we did find this recipe pretty darned involved to be honest, lots of stages. Was it worth it? Emphatically YES!

Plus, you make way more salsa verde than is needed for this dish and it makes a great marinade yada, yada. T’is a long old list of ingredients too but it’s good to go all out for a stellar dish that will impress yourself every now and again, in’t it.

It’s also great to be able to turn to the old faithfuls cabbage, cauli and broccoli when there’s not much in season, and create something so unexpected, gorgeous and substantial.

nb: there are several things that appear twice in the list in bold

1 and a half red onions, wedges

Salsa verde up first, put the ancho chillies and raisins in a bowl and cover with boiling water, leave to one side for 30mins to soften.

Meantime, chargrill the jalapeño (whole), garlic cloves and red onion wedges until blackened. Peel the garlic, then transfer the lot to a blitzer of some sort – the sort you have!

Add the drained raisins and ancho chillies and whizz it up. Add the remaining salsa verde ingredients, except the oil and whizz up again. With the motor running, if such a ting is possible with your blizter, ours is not as you know, slowly all the oil until well combined, season and pop in the fridge while you turn attentions to the veggies.

Blanch the broccoli, cauli and red cabbage in a large pan of salted boiling water for 2 mins, drain and transfer to a big bowl.

Lightly drizzle with olive oil, give it a spin round the bowl, reheat that grill pan and chargrill the veggies in batches until charred on all sides. Return to the same bowl, add the seeds and quickled onions and bung in a little more olive oil with some seasoning.

Spread the salsa verde over ya serving plate and layer the veg over it. Top with more seeds, quickled onions and the whole leaf herbs and your away. 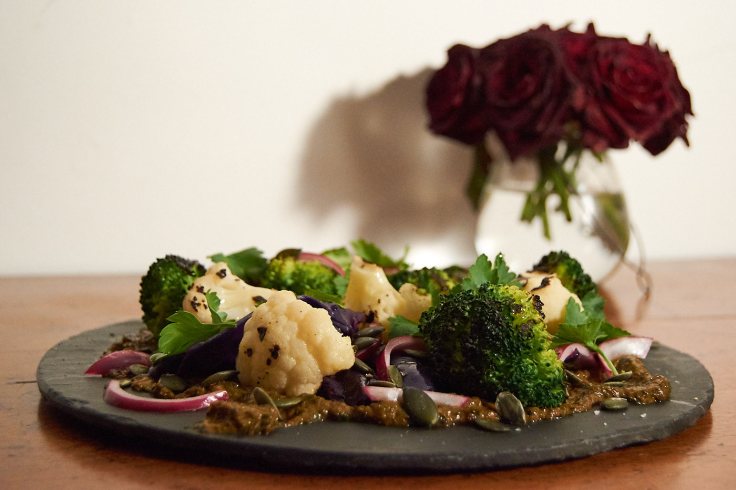 PS: the salsa verde will stay fresh in the fridge for 4 days. Pretty darned cool.

You can check out the vegan masters Shannon Martinez and Mo Wise, aka Smith & Daughters here and @smithanddaughters on insta.