Like rice pudding but with oats. Made seasonally appropriate and deeply delicious with a blood orange compote, made veegs with hemp milk.

T’is the season for citrus right now, no more so than the blood orange, with a shorter season than most orange varieties. Grown in Sicily, mostly.

Effortless to make and great for any time of the day, I’m a midnight cereal eater myself.

Exactly the same quantities and time as making regular porridge, and done in exactly the same way you make rice pudding only quicker. You could make it in your sleep it’s so easy!

Get 1 cup oats, 2 cups fluid (milks/water/etc) ½ cup sweet stuff of choice in an ovenproof shallow dish. Give it the quickest of stirs, whack in some spices if you wanna, the usual suspects, cinnamon, nutmeg. Bung it in the oven for 20-25mins at 180°C and ya done. For the compote, while the oats are in the oven, bit of sweet, bit of water, and the fruit in a pan to cook down slowly, you know this already.

One minute of your time and 25mins later you have this fabulousness. Result. 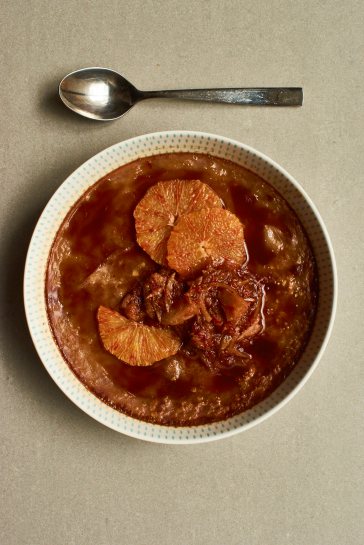